Gonzo’s Treasure Hunt invites you to an adventure of a lifetime in a slots-inspired live game show. If you are already familiar with the slot game Gonzo’s Quest, then you already know the kind of entertainment to expect. In this massively popular video slot, Spanish explorer Gonzo hunts for the lost golden city of Eldorado and its treasures. 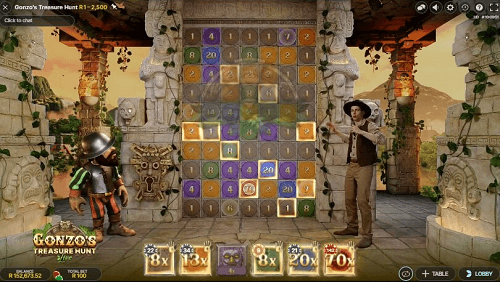 If you’ve played the money wheel Crazy Time, the game works similar to the Cash Hunt bonus which lets you pick stones to reveal a prize. Gonzo’s Treasure Hunt uses a combination of animation, live streaming and a Random Number Generator.

The game features a prize wall and this is where the gaming action occurs. In studio, you will see both the game host and an animated Gonzo character to guide you throughout the game. South African players can expect a price drop maximum of 20 000. The theoretical RTP for Gonzo’s Treasure Hunt is 96.56%.

You can play the game as follows:

Below are the payouts on Gonzo’s Treasure Hunt, from high to low.

Gonzo’s Treasure Hunt Live is the first project for Evolution Gaming’s collaboration with NetEnt. This entertaining game is available to play at South African casinos with Evolution Live Dealer Games, the top ones being Betway, Hollywoodbets and SportingBet.

Join in the hunt and start playing today!