Snake eyes is the hardest and lowest possible outcome in craps. The name itself is associated with bad luck in general, and such a roll is a loser in a lot of dice games. The probability of throwing snake eyes in craps is 35:1, with an enormous house edge of 13.89%.

The dice roll is called snake eyes because each die will display a single pip on top. In other words, a roll of two 1s on a pair of six-sided dice. The two pips or dots are said to resemble the small eyes of a snake. Snake eyes is also known as Aces of Two Craps. 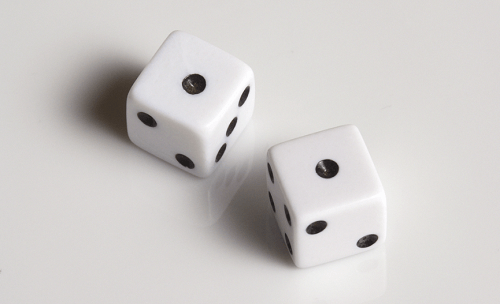 What Happens if Snake Eyes is Rolled in Craps?

Given that the odds of rolling snake eyes in the game of craps are low, the payouts are huge, sitting at 30:1. Snake eyes is one of the hardest rolls and is as rare as rolling a 12. This makes it one of the worst bets in the craps table located on the proposition bets. These bets often have really bad odds and huge house advantage.

What is the Best Bet in Craps?

The most common and best bet in online craps is the pass line. The pass line bet backs the shooter to roll a 7 or 11. If he does, you win. But if he rolls either a 2, 3 or 12, you lose. If anything else is the outcome, that number becomes a point, and he must roll again. You win each time he rolls the point, and you lose if it’s a 7 after the point has been established. The house edge for the pass line bet is 1.41%.

The don’t pass line bet is also a good one. It works vice versa to the pass line bet. Here, you are betting against the shooter. So, if he rolls a 7 or 11, you lose your bet in the come out roll. While a 2,3 and 12 creates an automatic win. The house advantage for the don’t pass line is 1.36%.