Home » Usain Bolt Will Not Be Joining Mamelodi Sundowns

Usain Bolt Will Not Be Joining Mamelodi Sundowns

Former Olympic sprinter Usain Bolt will not be joining Mamelodi Sundowns aka Masandawana. Bolt finally made his highly anticipated announcement today after hinting that he had joined a soccer team. Sundowns was touted as a possible soccer team after Bolt was pictured training at the club’s field in January. Read on. 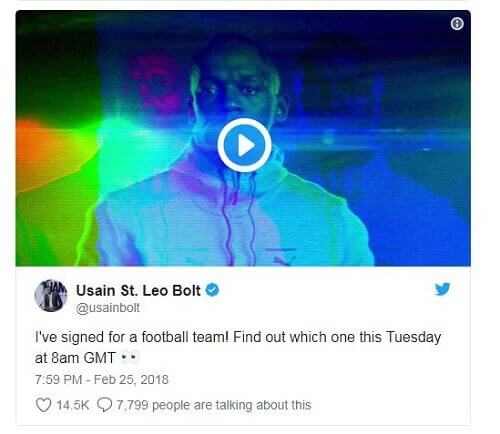 On Sunday, 25 February 2018, Usain Bolt took to Twitter to announce that he would be joining a soccer team. He says in the video caption: “I’ve signed for a football team! Find out which one this Tuesday at 8 am GMT.”

Since then, the world was counting down to the eight-time Olympic champion’s big announcement. Especially South Africans when Mamelodi Sundowns tweeted a picture of Bolt at Chloorkop and captioned it “Football will never be the same”. But, unfortunately, the 31-year-old will not be joining Mamelodi Sundowns as we had all hoped. 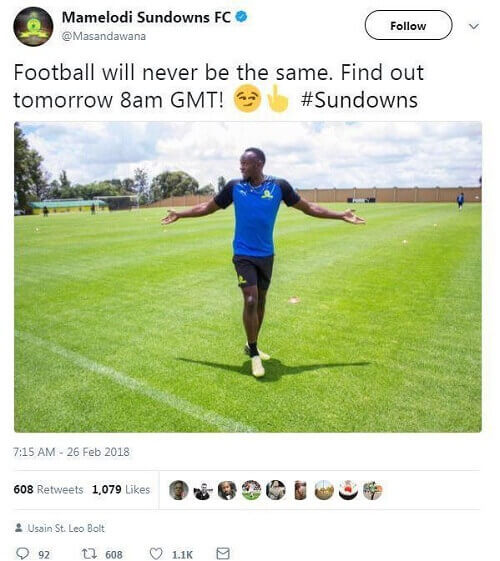 Bolt has signed up to feature at the Soccer Aid charity match for UNICEF in June at Manchester United’s Old Trafford. Along the sprinter will be football legends and A-list stars including the likes of Robbie Williams.

“Excited to announce that I will be playing in @socceraid for @UNICEF_uk   2018 at Old Trafford on Sunday 10th June. Make sure you’re ready @robbiewilliams,” said Bolt in a tweet. 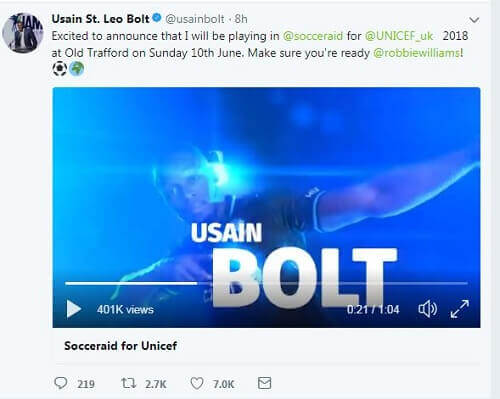 The UNICEF charity match does not consist of a professional soccer club, and Bolt will not be playing on a full-time basis. The deal is just to have the 100m world-record holder to appear at the match. The soccer game is set to take place on 10 June 2018.

During his visit to South Africa a few weeks ago, Usain Bolt enjoyed a trial with the Pretoria-based side and PSL leaders. The Jamaican track legend was linked up with the club for a Puma clothing campaign. Puma sponsors both the team and Bolt.