Understanding poker hands is a good start when you want to learn the game. This will help you know what hand has been dealt and what hand wins.

Try Your Hand at Poker

In general, a poker hand consists of five of seven cards falling into several categories. There is the high card, one pair, two pair, three of a kind, a straight, a flush, full house, four of a kind, then a straight flush followed by a royal flush – which is the highest of them all. 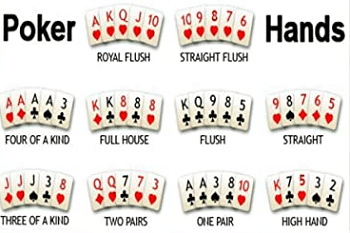 Obviously, the highest-ranking hands do not result more frequently – however, when they do, they pay out really well. For instance, a straight flush or royal flush would pay R500 with a R1 bet at some casinos. While some online poker games would payout R250 with a R1 bet, depending on the odds at the time. It gets even better in jackpot poker games.

What are the Hands of Poker? – Poker Hand Rankings (Low to High)

One Pair – Two cards of the same value and three side cards.

Three of a Kind – Three cards of the same value and two extra cards.

Full House – Three cards of the same value and two cards of another.

Four a Kind – Four cards of the equal value and one side card.

Straight Flush –  A straight with cards of the same suit.

Is three pair a poker hand?

No. Three cards of the same value in poker are called Three of a Kind. The hand is the highest after One Pair and Two Pairs.

What are the best poker hands?

What is the rarest hand in poker?

Royal Flush (A, K, Q, J and 10 of the same suit) is the rarest and most winning hand in poker.

What suit is highest in poker?

Spade is the highest suit in poker. Although rare, when it is needed that a hand is ranked by suit, it is done so alphabetically – clubs, diamonds, hearts, spades.

2 and 7 is the worst hand in Texas Hold’em as it cannot make a straight.

Yes, a high straight that is.

What poker hand should I start with?

What can beat a straight in poker?

Can a royal flush be beaten?

A royal flush is the strongest possible hand in poker and cannot be beaten.